HomeSonoma County Community Foundation recognizes DVAM
A- A A+ 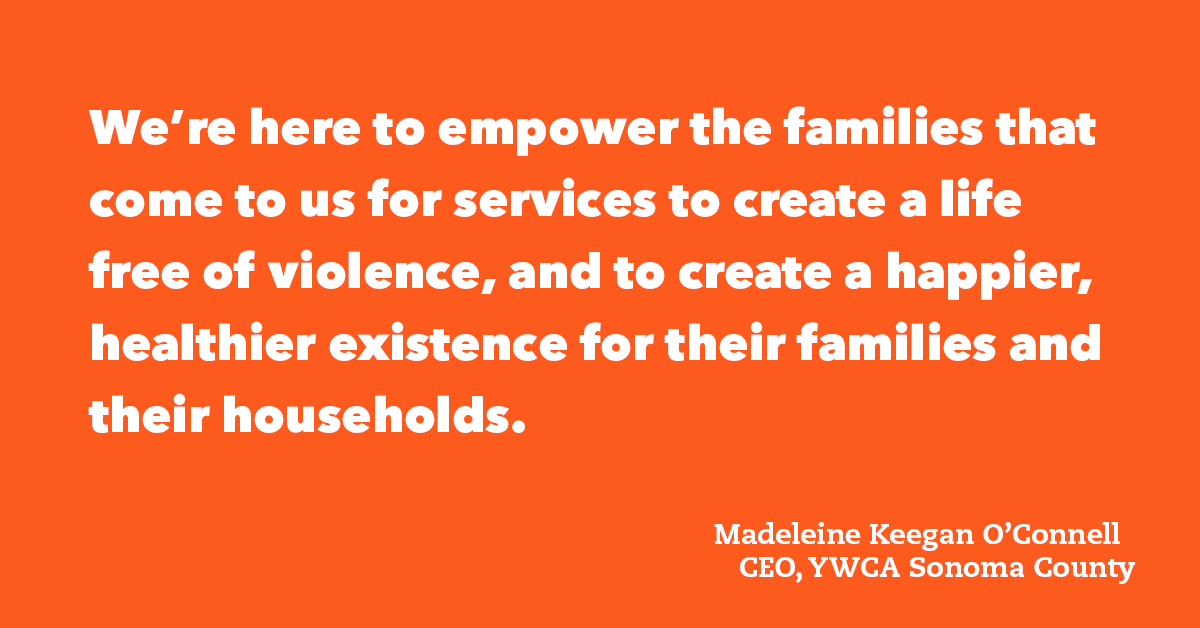 For more than four decades YWCA Sonoma County has been a safe haven for domestic violence survivors. The organization helps individuals and families through their hotline, housing, therapy services, a preschool, advocacy, and more. Founded in London in 1855, a branch was created in the United States just three years later. And while the local program continues to stay true to the overall national mission of racial, gender and economic equity, YWCA Sonoma County is also a leader in supporting those impacted by intimate partner violence here in the North Bay.

“We’re here to empower the families that come to us for services to create a life free of violence, and to create a happier, healthier existence for their families and their households,” says CEO Madeleine Keegan O’Connell. “We’re providing choices to people that once they take them, they change their path; they become empowered to direct their lives in a way that they previously have not been allowed to do.”

Since March, the pandemic has caused many organizations, including YWCA Sonoma County, to make some adaptations to how they provide services.

According to a June 2020 report from Johns Hopkins School of Medicine, the possibility of domestic violence incidents may increase during the pandemic, particularly if intimate partner abuse is already a factor. This may be difficult to track, however, as being confined to home with one’s abuser might make calling a hotline or seeking support more difficult.

O’Connell, who has been with the organization since 2012, says that this report reflects what’s happening locally.

“Shelter in place can actually be more frightening and dangerous in today’s pandemic for families who are dealing with violence in their home,” she says.

Still, victims are finding their way to YWCA. O’Connell says that although the hotline, for example, can have a decrease in calls when a national or regional emergency happens — such as during the 2017 fires — a sudden increase in calls sometimes follows. In a crisis, the shared loss of a home or a experiencing a significant traumatic event together sometimes leads people to stay together longer. But often, the cycle of violence will continue once the initial shock of a crisis has passed.

When survivors connect with YWCA, the support they receive can include any combination of services. Many initially utilize the hotline (707) 546-1234, which provides information, referrals and support. O’Connell says that many calls are often from friends or family, seeking advice on how to support a loved one experiencing violence in a relationship.

YWCA also operates a safe house, their residential shelter, which is in a confidential location. The residential shelter has remained open during the pandemic, with strict adherence to health and safety practices for both residents and on-site staff.

Additionally, YWCA offers therapy services, including groups in both Spanish and English, which have all been converted to online formats using Telehealth. Their latest newsletter shares a story of a young boy who before the pandemic was utilizing sand tray therapy as a part of his counseling. After transitioning to Telehealth, his therapist provided him with a mini tray he could use at home and he continues to benefit from support from YWCA.

“We also run the only therapeutic preschool in Sonoma County,” says O’Connell. “The curriculum is based on therapeutic principles designed to have children who have encountered ACEs, Adverse Childhood Experiences in their young lives, find a way to communicate the stress that they have endured.”

Although services continue and YWCA has received grant funding from Community Foundation Sonoma County, the pandemic has pushed them into a rough spot financially. Like other local nonprofits, their annual fundraiser which they rely on for a portion of their fiscal support, was cancelled in early 2020.

Additionally, October is Domestic Violence Awareness Month and O’Connell says the usual events she is invited to speak at each year have either been cancelled or converted to online formats.

“So it puts the onus on the YWCA and frankly, every nonprofit out there, again, to innovate and figure out how to create awareness,” she says, as Sonoma County moves through another intense fire season. “It reminds us that we need to band together and create safety for everyone in the midst of terrible issues, such as so many hundreds of families losing their homes. So fundraising is challenging in this environment.”

They continue spreading awareness and work toward destigmatizing survivors of intimate partner violence, however. A community resource page is available on their website, which includes information about educational activities to do with children,  wellness posts, housing resources, emergency information, COVID resources and more for those seeking support. Their October awareness campaign engages and connects people through social media through the hashtags #BreakTheCycle and #OctoberIsDVAM.

“There’s a stigma, there’s a fear. And a number of people don’t want to admit that this is happening to them,” says O’Connell. “And in terms of women, there are very successful women who on the outside might appear to be extraordinarily competent in every area of their life. And we don’t know that this is something that she is hiding or grappling with at home. So [our campaign] is about creating awareness so that we can create safety.”